Principal Trombone of Sinfonieorchester Basel and of the Capella Andrea Barca.
He gives masterclasses in the United States, Asia, and Europe and he is also regularly invited to be part of jury member in national and international competitions. 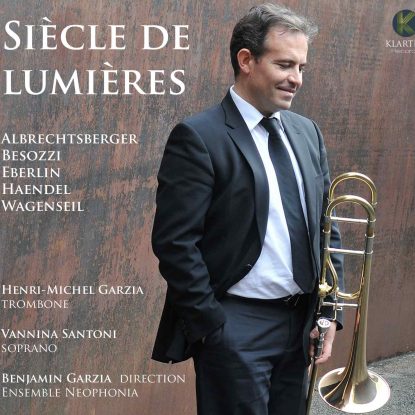 Brigitte Garzia-Capdeville was born in Los Angeles where she started her musical studies at the age of nine. She quickly distinguished herself in numerous national and international competitions such as the National Coleman Chamber Ensemble Competition, Cypress College Piano Competition, Music Teachers’ Association «Voce» Competition and International Piano Recording Competition. She has also been recognised by the Rotary Club of Pasadena for her work as president and organiser of concert series to promote young artists.

The polish government awarded her a scholarship whish allowed her to obtain her Concert Diploma at the Frederic Chopin Academy in Warsaw under the tutelage of renowned pianist Regina Smendzianka. Following her studies, the Chopin Academy offered her a position as vocal coach in the opera department, a position she held until 1997.

Brigitte Garzia-Capdeville served on the piano faculty at the Conservatoire de Musique, de Danse et d’Art Dramatique du Pays de Montbéliard from 1999 to 2006, where she was also head of the polyphonic instruments department. She is currently Professor of Piano and head of the keyboard department at the Conservatoire de Musique et de Danse de Saint-Louis, a position she holds since 2006.

Brigitte Garzia-Capdeville is a laureate of the Ignacy Jan Paderewski International Piano Competition. She has performed in recitals, as a soloist in orchestra and in chamber music ensembles in France, Germany, Spain, Switzerland, Poland, Singapore, Russia, The United States, Morocco and Taiwan. She has been a guest at renowned music festivals such as the Basler Sommerserenaden, Museumsnacht Basel, Chamber Music Series of the Sinfonieorchester Basel, Festiwal Jesienno-Zimowi in Zelazowa Wola (Chopin’s Birthplace), Festiwal Pod Pomnikiem Chopina, Epsival, Olsberg, Les Doges, Schauenberg Piano Festival.

In 2012-2013, the composer Laurent Riou wrote his Tryptique for trombone and piano for the Duo Garzia, a duo that Brigitte Garzia-Capdeville forms with her husband, Henri-Michel Garzia, Principal trombone of Sinfonieorchester Basel. The Swiss horn player Jean-François Taillard (principal horn of the Sinfonieorchester Basel) dedicated his arrangements of George Gershwin’s Rhapsody in Blue for piano and large brass ensemble and brass quintet to her, which she has performed regularly with the Grand Ensemble de Cuivres d’Alsace (GECA Brass) and the Basel Chamber Brass.
Brigitte Garzia-Capdeville was invited by Soochow University of Taiwan in April 2017 to give a Piano masterclass and a recital performance with the Duo Garzia.

She has been invited to be part of the jury for the upcoming Ninth Seattle International Piano Competition in 2022.

By clicking “Accept All Cookies”, you agree to the storing of cookies on your device to enhance site navigation, analyze site usage, and assist in our marketing efforts.
Read our Privacy Overview.
However you may visit Cookie Settings to provide a controlled consent.
Cookie settingsACCCEPT
Manage consent

When you visit any website, it may store or retrieve information on your browser, mostly in the form of cookies. This information might be about you, your preferences or your device and is mostly used to make the site work as you expect it to. The information does not usually directly identify you, but it can give you a more personalized web experience. Because we respect your right to privacy, you can choose not to allow some types of cookies. Click on the different category headings to find out more and change our default settings. However, blocking some types of cookies may impact your experience of the site and the services we are able to offer.